Check out our list of chilling reads for Halloween. Hauntings to get your heart pounding. Vampires to get your bone-chilling. Even thrillers to get your pulse racing. It’s fall, so let’s get spooky. Atl, a descendant of Aztec blood drinkers, is on the run from a rival narco-vampire clan. As she navigates the dark streets of the city she comes across a scrappy young man named Domingo. Sure, he is charming, but he definitely isn’t part of her escape plan.

As the two try to escape, corpses piling up behind them, every street becomes more dangerous than the last. In a city full of police, crime bosses, and vampires, do Atl and Domingo even stand a chance? While vampires have moved from traditional horror to something a little less scary, they weren’t always portrayed as sparkling teenagers. The OG vampire, Dracula, took his throne in 1897 when Bram Stoker wrote his famous novel and added a bit of horror to classic literature.

Told through a series of letters, diary entries, newspaper clippings, and ships logs, Dracula is a tale of love, mystery, and death. The titular character, Count Dracula, can entrap men, seduce women, and kill without mercy.

When the Count makes his way to a small English town he begins to prey on a woman named Lucy. Her best friend Mina notices that Lucy is clearly ill, but it isn’t until after Lucy’s death that the truth is revealed. Lucy had become a vampire and the man who turned her has now set his eyes on Mina. 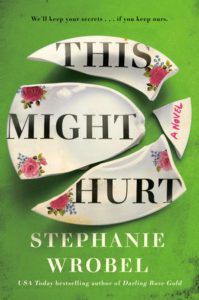 A six-month retreat might sound like the perfect way to reset, but sometimes things don’t go according to plan. This suspenseful thriller may not have the ghosts and ghouls of a horror novel, but it will certainly have your heart racing.

Kit has been unhappy with her life, especially after the death of her mother. She knows there is more out there in life, but she can’t find it. Then she found Wisewood, a six-month retreat on a remote island off the coast of Maine. After agreeing to the very strict no-contact rules, Kit gives her sister Natalie one last call before heading out on her self-discovery journey.

That was six months ago. Now Natalie is getting emails from Wisewood threatening to reveal Natalie’s secret to Kit. Panicked, Natalie raced to the retreat to find her sister. Turns out Wisewood won’t let the sisters go so easily. Who says thrillers can’t be scary books? Take everything you know about Gothic novels, and turn up the intensity. Rivers Soloman bends this classic genre into something contemporary, terrifying, and groundbreaking. Here the monsters aren’t just the people, but entire nations.

Despite being seven months pregnant with twins, Vern manages to escape the religious compound where she was raised. Fleeing to the woods, she manages to give birth, and begin to raise her children within the confines of the wilderness. However, she is a hunted woman.

When the religious community finally finds her, she fights back. She transforms and unleashes a terrible brutality on the hunters that no one has ever seen before. But to truly understand these changes, Vern must face her past and uncover the secrets of the compound she tried desperately to leave behind her.

Nothing But Blackened Teeth, by Cassandra Khaw What is a list of scary books without a good old-fashioned haunted house? Cassandra Khaw offers a haunting tale of friendship, secrets, and a lonely ghost bride. Of course, the real horrors of haunted houses are the secrets they hide.

An abandoned mansion sits on the bones of a long-dead bride. Inside the walls lay the remains of young girls sacrificed to the woman to keep her company. While most would stay away from this ill-reputed house, it soon becomes the location for a reunion of thrill-seeking friends.

Of course, a night of drinking causes more than just a fuss, it brings out many deep dark secrets. While these friends start to question their relationships, they soon find that they aren’t the only ones hiding the truth. Lurking in the shadows is a lonely woman with a black smile and a hungry heart. Imagine surviving a horror movie – being the last person standing as the credits roll. That is a final girl. She is the person who remains. But what happens afterward? Therapy.

Lynnette Tarkington survived a massacre. She is a final girl and has spent the last decade meeting other final girls in a support group. Lynnette just wants to put her life back together, but it seems that the life of a final girl will never be the same again. After a member of her support group goes missing, Lynnette realizes that they are all in danger of having their lives ripped apart – again.

This humorous take on horror films offers tribute to the classic scream queens and final girls of the past. Grady Hendrix is known for his fast-paced and funny thrillers that subvert the expectations of popular horror stories. Final Girl Support Group does just that and is perfect for any horror film fan.

The Dead and the Dark by Courtney Gould Ghost hunters know what they are getting into when they step into a haunted house. But what happens when the whole town is haunted? Fans of ghost hunting and paranormal activity will find just the right amount of haunts in Courtney Gould’s debut novel, The Dead and the Dark.

Snakebite, Oregon, isn’t normal anymore. The weather is strange, people are turning up dead, and teenagers are disappearing. By coincidence or ill-timed fate, things started to get odd just as Logan Ortiz-Woodley and her dads, TV ghost hunters, moved to town.

Eventually, Logan meets Ashely Barton, who believes her boyfriend’s ghost is following her around. While many don’t trust the Ortiz-Woodley’s, Logan may be Ashley’s only hope to get answers. However, as the two girls begin their own paranormal investigation, they find that Snakebite is more than they realized.

My Heart is a Chainsaw, by Stephen Graham Jones Slasher films are peak Halloween horror, but can these gory haunts translate into scary books? Stephen Graham Jones does just that in this homage to serial killers. However, Jones’ tale isn’t just about stopping a killer, it’s about healing.

Jade Daniels is a young woman with an abusive father, an absent mother, and a town that wants nothing to do with her. She knows she has no place in the world but finds a unique kind of solace in her favorite slasher films. But when blood actually starts spilling and a killer is on the loose in Indian Lake, Jade predicts exactly what will happen next.

Readers are pulled into Jade’s dark narrative as a killer makes their mark on her hometown. But beneath the killer’s mask, Jade realizes that there is more to this monster than she initially thought. Known for his lyrical writing style, Michael Takeda’s newest book is a magical blend of horror, mystery, and vampires. Moth follows Michael Gallo, a young gay man with an addiction through the dark streets and underground bars of Urbino, Italy.

After his drug conviction, Michael meets with a paralegal named Arturo to help with his case. However, Arturo becomes obsessed with the recent murders plaguing Urbino. Every death linked to haunting golden-eyed strangers – the same kind of stranger Michael encountered only a few nights before.

Celebrate your Halloween curled up with one of these twisted tales. They are just the right amount of fright for a spooky night inside. What are some of your go-to scary books?

Photo by Tengyart on Unsplash Have you ever seen one of those children's mix-and-match books of people or animals with the pages cut horizontally into thirds? The idea is...

The Recipes are Almost as Spicy as this Romance

This Fantasy Romance brings the spice